A Tale of Two Beaches

Who Doesn’t Love a Good Beach?

The next phase of construction has begun on the house that I purchased in León. The contract was signed, money was wired, and a set keys were handed over to the contractor. He now has possession and responsibility of the property. He told me that I could leave for four months, that he would take of everything. I don’t trust him that much, but I do trust him enough to go the beach for the day.

Twenty kilometers west of downtown León there are two wonderful beach towns, Las Peñitas and Poneloya. I have fallen in love with being able to hit the ocean for a couple of hours when my schedule permits. Though I have lived near water my entire life, lakes and rivers just can’t compete with the Pacific. For C$14 (less than $0.50), I can catch the bus from the Subtiava market in León to the coast. The bus makes multiple stops along its route, just tell the driver where you are going and they will drop you off right in front of your destination.

If you are looking for a quiet day of surf and sand, Poneyloya is nice escape from the city. It is a small vacation and fishing town, without the crowds, except during the various holiday weeks.

A super-cool note, it is an estuary for sea turtles. The turtles come here to lay their eggs. All too often, poachers have tried intercept their eggs for resale.  Across the river on Isla Los Brasiles, the Surfing Turtle Lodge has led a movement to help protect these animals by creating a hatchery and sanctuary for these threatened animals. Backpackers staying at the Lodge are able to participate in helping protect the newborn turtles.

Poneloya is more of a locals beach. Unfortunately, this beach is dirtier than others I’ve visited. Locals in León are very care-free about garbage. They have no problem tossing their trash on the sidewalk, street, out the car or bus window, or on the sandy beaches. Because it is less developed, many people “picnic” at the ocean shore. With no garbage receptacles in sight, greasy styrofoam containers and plastic bags flutter in the wind.

Poneloya is quieter and less crowded, but it lacks some basic amenities. For instance the couple of restaurants I’ve been to don’t sell alcohol, not the end of the world, but I enjoy a couple of cold beers with the freshly caught fish entrees. However, staff members are more than willing to make a beer run for you. 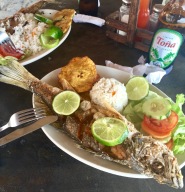 Also, the places that I visited didn’t have restrooms. The ocean is only yards away, having to go Number #1 isn’t a problem, but changing in and out beachwear or the need for a bathroom stall is awkward and uncomfortable. The hostels and guesthouses are properly equipped, of course.

Las Peñitas is a bit more touristy, but not to the point of being overwhelmed nor annoying. There are plenty of hostels, hotels, bars, and restaurants to choose from. The southernmost part of the beach starts near the fishermen’ cove just in front of Barca de Oro Restaurant and runs seemlessly north, further than the eye can see,  eventually blending with Poneloya. 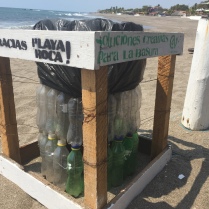 I prefer Las Peñitas because it is more developed. It offers more restaurants, bars, surf rentals, and lodging.  Because this beach sees more traffic, it is much cleaner. Some of the local business owners have come together to try to keep the beach clean. They have put trash containers along the road and the beach. Even the locals are getting the hint and utilizing the bins.

I have a go-to spot that I like to frequent in Las Peñitas called Playa Roca. Even though it is one of the more popular spots along the beach, during off hours it very pleasant and relaxing.  What I like most is the view. The bar is located directly in front of a large rock formation that is accessible during low tide. It provides a very picturesque backdrop to either sunrise or sunset. 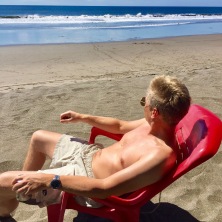 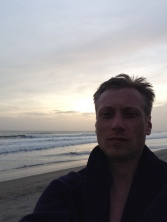 Though Playa Roca can get a bit touristy at times, it normally offers a good mix of locals, expats, and vacationers.  The internet works great which is huge plus for those working remotely. The tide is perfect for surfing but calm enough to wade within forty yards of the shoreline.  They offer showers, a full kitchen, bar, and rooms for rent. 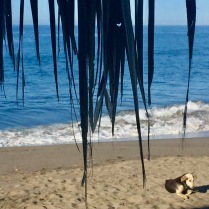 I am writing this while watching the waves crash and the surfers waiting for the perfect ride back to shore. Though pleasant and cool under the shade providing rancho, I can still feel the sun’s force. A light breeze is blowing, circulating the heat around me like a convection oven. The ocean water is refreshing without being as cold as the liters of Victoria I’ve been drinking since 11:00 this morning.

There is something about day drinking, isn’t there? I love it, but it wrecks me for the rest of the day. But I do love it so.  I see a siesta in my near future.